What is Process Hollowing?

Process Hollowing (or Process Replacement) is a technique employed by a malware with the purpose of hiding itself under a legitimate process thus evading detection.

Process Hollowing occurs when a malware creates a benign process in a suspended state and then unmaps and replaces the process memory with malicious code.

Such a sequence of API function calls makes a pattern that clearly indicates that the malware is attempting to perform Process Hollowing.

The sample that I’m analyzing can be downloaded from here.

These are the sample hashes:

Sections look OK. The sample is not packed.

There is one embedded resource named LOCALIZATION in the .rsrc section. I can dump this resource using the Resource Hacker tool: the resource appears to contain raw binary data.

The NtUnmapViewOfSection string looks like an import that the malware may resolve at runtime using GetProcAddress.

The main function starts by getting a handle to the malware executable.

Then it calls a subroutine (sub_40149D) to obtain the full path to the Windows svchost.exe executable, which is a system process used to host multiple Windows services. The full path is stored in the ApplicationName local variable.

Next the function sub_40132C is called with the handle to the malware executable as a parameter.

The purpose of the sub_40132C function is to drop the embedded resource, copy it in memory and decrypt it. So I renamed it to Sub_DropResource.

The decryption routine is called only if the first two bytes of the resource are not 0x4D 0x5A; since these two bytes are the MZ signature of DOS executables, I guess that the resource is an ecnrypted PE executable. So the main malware module is indeed a loader (or dropper).

After decryption, the pointer to the decrypted resource in memory is returned to the calling main function and saved in the lpBuffer variable.

Let’s give a quick look at the decryption routine sub_401000 (renamed to Sub_DecryptResource).

The decryption routine loops through each byte of the dumped resource and performs a XOR operation with the key 0x41:

I can obtain the fully decrypted resource from its original version by applying the XOR transformation using a tool like Cyber Chef or via a simple python script like this:

The decrypted resource is indeed a DOS executable. I will analyze it later on.

After dropping and decrypting its embedded resource in memory, the malware calls the function sub_4010EA. Since I know (after my analysis) that this function performs process hollowing, I renamed it to Sub_ProcessHollow.

I renamed the pointer to the decrypted executable to lpDecryptedResource.

By the way, the pointer to the PE header of the dropped executable is saved into var_8 which I renamed to Var_PEHeader. The malware will be using this pointer later on.

Now the process hollowing procedure begins. Let’s dig into the details of each step:

Step 1: Creating a process in a suspended state

The malware first creates a process by calling the function CreateProcessA (at 0x40115F); the process executable is svchost.exe.

As we will see shortly, the process is created in a suspended state. This is a clear indication that the malware is attempting to perform process hollowing: the malware will overwrite the memory space of the legit svchost.exe with some other malicious code that it wants to hide - most certainly, the dropped executable!

This is the call to CreateProcessA:

The function CreateProcessA takes many parameters, among which:

Let’s follow the execution in OllyDbg. Before executing, I place a breakpoint at 0x40115F (right before the call to CreateProcessA); if I step over to the next instruction, I can see in Process Explorer that the new process is indeed created as Suspended.

I will keep the debugger paused and step over the execution as needed during the following analysis.

Obtaining the ImageBase address of the suspended process

After creating a new svchost.exe process in a suspended state, the malware obtains a handle to the suspended thread by calling GetThreadContext at 0x401195. The GetThreadContext function is passed the hThread parameter, which comes from the same PROCESS_INFORMATION structure passed to CreateProcessA; this thread handle is used to interact with the suspended process.

The hThread value is 0x44. Other than looking in the stack view of the debugger, I can also read the thread handle in Process Hacker: just double-click on the Lab12-02.exe process, open the Handles tab and look for the Thread type. By the way, this same window also shows the Process handle value (0x34). 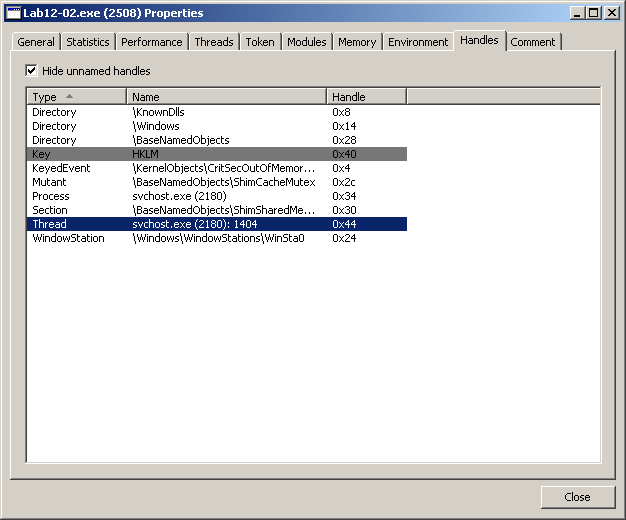 The GetThreadContext function returns the thread context in a CONTEXT structure which is pointed to by the lpContext parameter (for such a structure the program just allocated memory space by calling VirtualAlloc at 0x40117B).

After that, the malware uses the CONTEXT structure (pointed to by lpContext) in a call to ReadProcessMemory:

Here the malware is reading 4 bytes (nSize = 4) from the memory space of the svchost.exe process (hProcess = 0x34) starting at the lpBaseAddress address. The lpBaseAddress is calculated as follows:

What is this address pointing to?

To answer this question, we need to understand the CONTEXT structure. 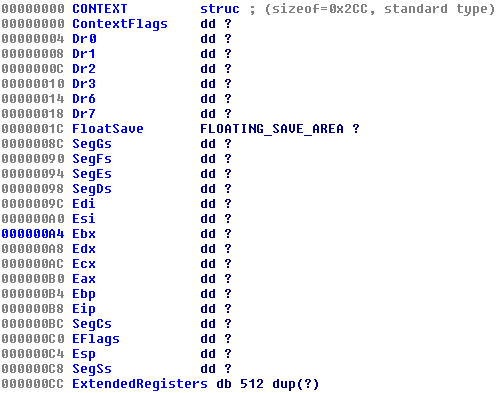 Now in the Assembly view, at location 0x4011C3, if we right-click over 0A4h we can expand that value to read as the following:

So the lpBaseAddress is pointing to the ImageBaseAddress, that is to the start of the loaded executable (svchost.exe).

The lpBaseAddress value is 0x7FFDF008; I can inspect the memory area of the suspended svchost.exe also using the Memory tab of Process Hacker: the PEB is showed at address 0x7FFDF000 and at offset 0x8 I can see the ImageBaseAddress pointer value of 0x01000000 (01 followed by six zeroes). 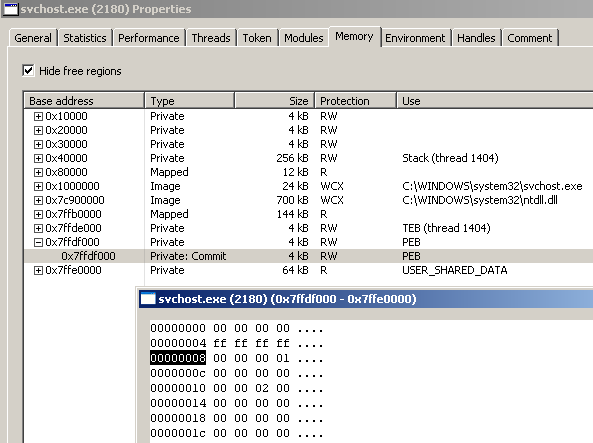 Then reading 4 bytes starting at the lpBaseAddress, will place the ImageBase address of the suspended process (ie: 0x01000000) into the Buffer variable. This is the dump view of the Buffer variable after the call to ReadProcessMemory:

The address of the NtUnmapViewOfSection function is placed in a variable named var_64; the function is then called at 0x401206, passing in the ImageBase address of the suspended process (Buffer = 0x01000000) and the handle to that same process (hProcess) as parameters:

The malware calls NtUnmapViewOfSection to unmap the suspended process from memory.

Let’s step over and pause the debugger at 0x401206. This is how the memory of svchost.exe appears in Process Hacker right before the call to NtUnmapViewOfSection: 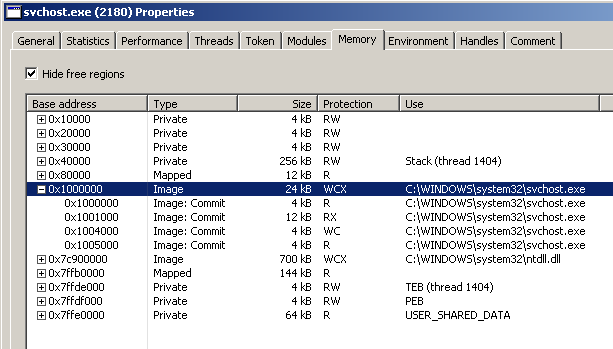 Let the call execute; now hit the refresh button in the Mememory tab of Process Hacker and see that the memory area of svchost.exe is gone:

Now the malware allocates new memory within the address space of the suspended process (hProcess). This is the call to VirtualAllocEx:

Both lpAddress and dwSize are valued as offsets of the PE header of the dropped executable, respectively 0x34 and 0x50 (the pointer to the PE header was saved in Var_PEHeader). Looking at the PE file format documentation, we can verify that:

We can verify these offsets also opening the decrypted dropped executable with PEview (or other similar tool) and looking for the ImageBase and SizeOfImage fields in the IMAGE_OPTIONAL_HEADER header.

We can add new standard structures in IDA Pro: IMAGE_DOS_HEADER, IMAGE_NT_HEADERS and IMAGE_SECTION_HEADER (I will use the latter lately). Now we can ask IDA Pro to display those offsets in a much more readable way by right-clicking on them and choosing the appropriate offset from the Structure offset list. Then the previous code block would appear like the following:

So, back to our malicious program, the call to the VirtualAllocEx function will allocate a number of SizeOfImage bytes (0x7000) starting at ImageBase address (0x400000). Since the malware is going to write into this new memory space, the allocation is done with PAGE_EXECUTE_READWRITE permissions (flProtect = 0x40).

After the call executes, we can verify in Process Hacker that there is a new memory region at base address 0x400000 which is initialized to zeroes. Notice that the permissions are set to RWX: 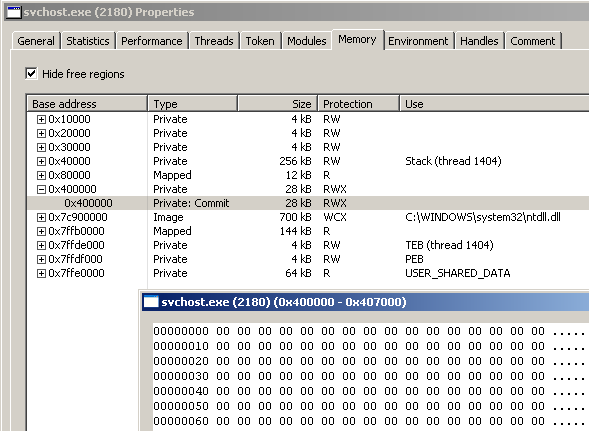 The pointer to the newly allocated memory region is saved into lpBaseAddress.

Step 4: Writing the malicious code into the suspended process

After unmapping the original svchost.exe image from memory and allocating a new memory region within the suspended process, the malware writes its malicious load into that memory region.

I can verify looking in Process Hacker: 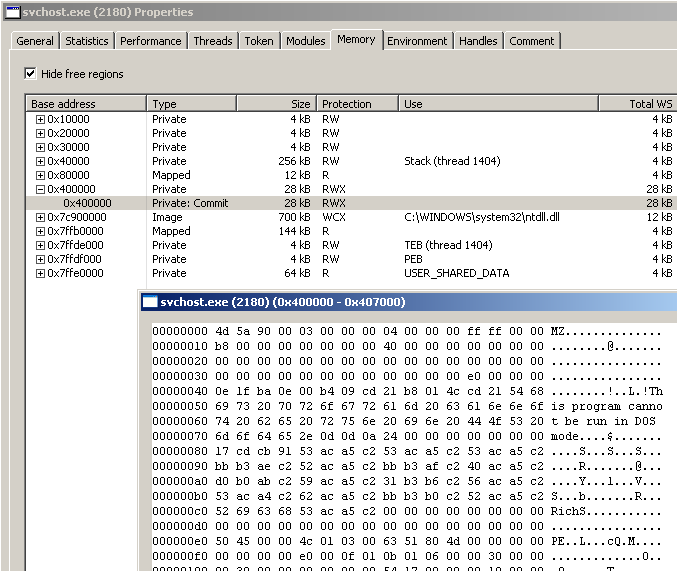 Next, the program cycles thru each PE section, writing the raw bytes of each section. 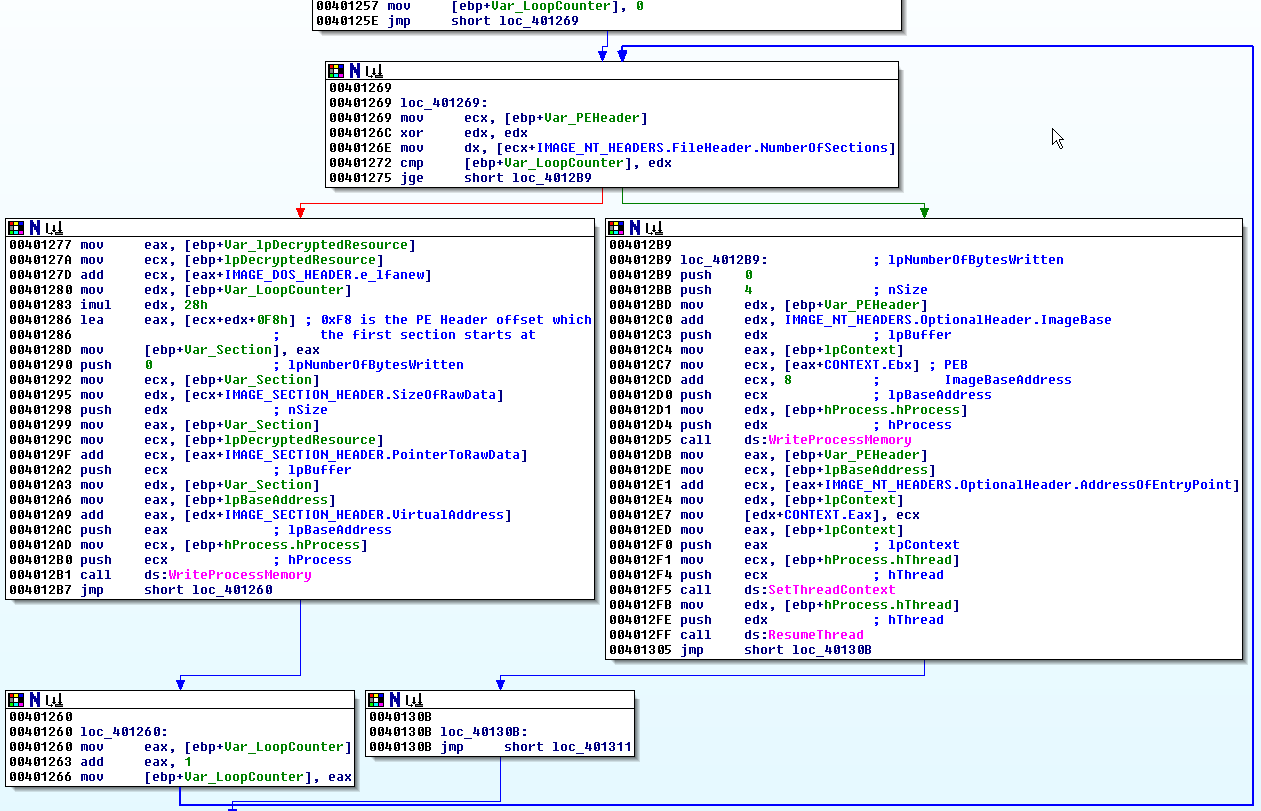 This is the loop body:

For each PE section, the WriteProcessMemory function writes the section’s raw bytes into the newly allocated memory region, starting at the address specified by the IMAGE_SECTION_HEADER.VirtualAddress field of the section header.

I can inspect the process memory with Process Hacker to verify that each section is written (place a breakpoint at 0x4012B7).

Once finished writing the sections, the program updates the ImageBaseAddress in the PEB with the proper ImageBase value read from the dropped executable PE headers:

Steps 5 and 6: Setting the entry point and resuming the thread

Then the malware uses SetThreadContext to set the EAX register to the entry point of the malicious executable that was just loaded into the suspended process, so that its execution will resume from there.

The pointer to the EAX register is found in the CONTEXT structure at offset 0xB0 (instruction at 0x4012E7).

And finally the thread is resumed!

Wow, that’s how process hollowing works under the hood!

Analysis of the dropped executable

I’ll give hear a brief explanation of what the dropped executable does as well.

These are its hashes:

A quick analysis of the strings and the imports is sufficient to infer that the dropped executable is a keylogger.

The following strings suggest that the malware may perform some keylogging activity:

The following imported functions are a clear indication that the malware is performing hook injection:

Hook injection is a technique that abuses Windows hooks to intercept messages destined for applications and is frequently used by keyloggers.

Disassembling the dropped executable with IDA Pro confirms that the sample is indeed a keylogger that hooks to the WH_KEYBOARD_LL event (at 0x401058).

The main function is responsible for performing the hooking.

The sub_4010C7 routine takes care of the keylogging functionality. A quick analysis of this function reveals that the keys pressed are written to a file named practicalmalwareanalysis.log, along with the name of the application window they are pressed in.

Let’s fire a complete run of the malware!

how can it be detected?